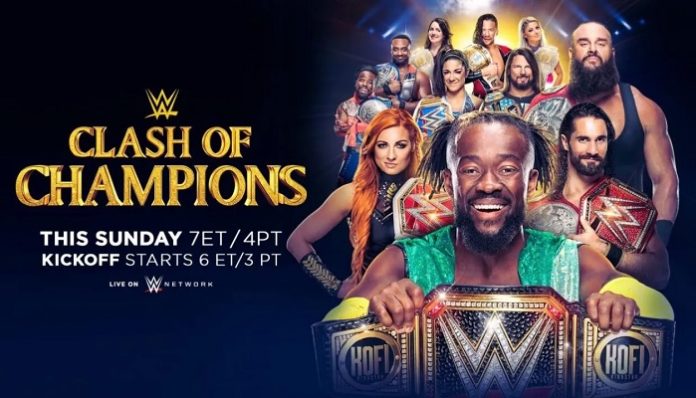 “The only night where every championship has to be defended” WWE’s September PPV – Clash of Champions has arrived and I am here to predict it!

Who will have the honour of holding the titles heading into October, Hell in a Cell, and Smackdown on FOX?

I will try to figure this out, right now:

RooDolph the impromtu tag team, will soon have a very shiny red belt!

This is an exciting night indeed for Rollins & Strowman, who will have to help each other out and defend their tag belts together, only to fight one another for the Universal later on in the evening.

Weirdly, this match is not against the O.C. and instead is versus the strange alliance of Ziggler and Roode. Even though this tag team was outta nowhere more than an RKO, I believe they will be walking out as tag champs.

The main story is how can Braun & Seth cope and I feel like they may crumble. Either that or Gallows and Anderson do get involved. I’d rather the Monster Among Men take his revenge out on his partner adding more odds to his Universal title match later on.

However it happens, Dolph Ziggler and Robert Roode would be GLORIOUS!

The Cruiserweight’s always provide thrilling matchups and this one won’t let us down! Drew Gulak is a star. Lince Dorado is fun. Humberto Carrillo is talented and I can see him walking away as champ!

I am actually going to pick Drew Gulak though as I don’t see his title reign ending here.

With NXT moving to TV with the next episode, I hope 205 Live quickly dies out and this division showcases their skills on that platform.

Paul Heyman clearly has high expectations for Cedric Alexander and I can see him headlining RAW in no time!

This United States Championship could potentially be the match of the night and no wonder; these 2 stars are some of the best in the company!

Either the rest of the O.C. get involved or we just get a great match, I think the phenomenal one will remain on top of America.

It is clear that WWE don’t have much care for the women’s tag team championship as it barely gets thrilling storylines and will most likely appear on the Kickoff.

Also, we are just forced to forget about the confusing relationship between Bliss and Cross.

Due to this title run still being quite fresh, I think they will defeat Rose & Deville.

We haven’t seen Xavier Woods since FTRKO’s viscous attack a few weeks ago and I think this should play into the story of the match. Will the New Day be able to regroup and handle this match?

I can actually see the Revival winning here. They are really good and this new alliance with Randy Orton reminds me of Legacy back in the day.

Due to my prediction later on in the evening I still think the New Day will be on top.

So we finally know who attacked Roman Reigns on multiple occasions and that is Big Red, Erick Rowan! Apparently, Daniel Bryan doesn’t control him and he is ready to face one of the biggest stars in the company in a No Disqualification.

To heighten the star power of Rowan he should beat Roman but placing my prediction on the Big Dog is more of a safe bet.

I can see Daniel Bryan coming out during this match – either has a face stopping Rowan from decimating Reigns, or he is revealed as the mastermind after all.

WWE will be changing their minds every minute…

At SummerSlam, this encounter ended in a no contest after Orton tried to hurt Kingston in front of his family.

We know that Kofi’s family and New Day brothers mean a lot to him, so Orton tormenting them alongside the Revival has made this feud personal.

Kofi has the biggest obstacles stacked against him and like last month I am going to say, beating Orton will cement him as a top babyface; where he deserves to be.

Kofi will survive the FTRKO and move onto a new feud heading into FOX’s Smackdown.

I wish it isn’t a returning Brock Lesnar…

Bayley’s heel turn shocked me like most of the fans.

It has certainly added an exciting twist to this storyline!

This is a difficult prediction as WWE love Charlotte and where else should they make her a 10 time champ than in her hometown?!

I think the reason why Charlotte pinned Bayley in Madison Square Garden though, is so she looks strong before being defeated by a retaining Bayley.

If there is a time for Becky Lynch to lose the RAW Women’s Championship, this is the time.

Sasha Banks has finally made her return, turned heel and changed her hair!

This will be an exciting match as they are 2 of the most talented in the female division!

Will the winner be the Man, Becky Lynch (who is the WWE2K20 cover star)?! Nah, I have to agree with Michael Cole… tonight is BOSS TIME!

Shinsuke Nakamura has been aligned with Sami Zayn for one reason – No Speak English!

This may fade away though after Undertaker’s chokeslam…

You could say due to this rise on Nakamura he will win, however I am actually picking the Miz.

Yes, this may be crazy. You may be shouting “MIZ IS A RAW STAR!” but I am sure a shakeup is happening before Smackdown moves to FOX anyways.

The main reason for this prediction is the amount of times Miz’ title reigns have been mentioned. Miz is an 8x Intercontinental Champion, 1 away from tying Chris Jericho’s most reigns as IC Champ. The same Chris Jericho that is the 1st and current AEW Champion.

WWE can be seen as a petty company and to throw shade at AEW it is time to overwrite history.

Whatever happens earlier in the evening, we know for a fact that Seth Rollins will go one on one with his partner Braun Strowman!

This is a really hard one to predict:

Seth Rollins is hot of a win over the Beast, Brock Lesnar.

Braun Strowman has lost in every big match he has been apart of.

I have took a gusty move but I think it is the best solution to end in a draw.

Have “We are glad that you’re our friend. This is a friendship that will never ever ever ever ever end” play, before the lights and music become distorted. Then the anticipated Fiend lays them both out, closing the show with the Universal title in shot.

Let Him In. Hell in a Cell, Triple Threat match made for the next PPV.

Prediction: Draw due to the Fiend

And there you have it – WWE Clash of Champions has been predicted!

Add 24/7 shenanigans in there and no wonder they couldn’t fit the Baron Corbin vs Chad Gable, King of the Ring finals on the show (I am predicting King Shorty G by the way).

Exciting times lie ahead for WWE, wrestling and all of its spectacular fans with NXT moving to TV and becoming 2 hours long, Smackdown moving to Friday nights on FOX, AEW heading to TV and Hell in a Cell highlighting the Fiend – I can’t wait for the games to begin!