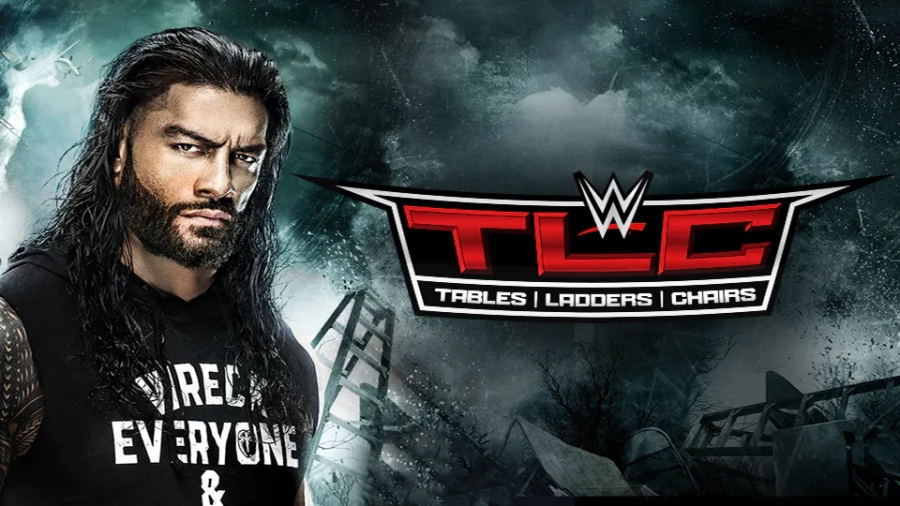 ‘Tis the season to be jolly….. Tables, Ladders & Chairs shalalala.

Alright, I’ll admit that was bad. But it is Christmas and the final WWE PPV of the year, dammit!

TLC, also known as Tables, Ladders & Chairs. Sometimes ‘& Stairs’. Also known as Tender, Love and Care but there’ll be none of that tonight. Additionally, it is a group that sang ‘No Scrubs’ and ‘Waterfalls’ but that is beside the point. Tonight, we will see tables broken, ladders climbed and chairs…. sat on?

This is more often than not a throwaway PPV but it has seen some cool spots in its time. Such as Randy Orton beating John Cena to solidfy the WWE & World Heavyweight championships. Or even last year when we seen the Kabuki Warriors face Becky Lynch & Charlotte for the tag belts which feels like it was five TLC’s ago not one.

Nevertheless, tonight’s card is stacked with engaging matches and a firefly inferno match. That has nothing to do with the TLC gimmick!! Anyways, I am excited to see how WWE end this King Corbin promo known as 2020, so let’s begin predicting:

Let’s start big. By big, I mean let’s discuss the ‘Big dog’. Oh scrap that, he is the Tribal Chief now.

This Tables, Ladders and Chairs Match will certainly see drama, violence and Jey Uso interference. Owens isn’t fighting Roman Reigns, he is against the table and that table consists of multiple men with an opinion.

No doubt this match will be entertaining, however, I can’t see it furthering any more from there. Owens will give the good fight but fall short in the end. Reigns will retain the Universal Championship and charge onto the Road to WrestleMania with the largest bounty.

I can see Reigns defending against someone like Daniel Bryan at Royal Rumble as they teased that a few weeks ago, when Uso turned heel during his match with Bryan.

This match will be fun and that is literally all I have to say. I am curious if they will put the RAW Tag titles on the Hurt Business. With Lashley holding the U.S. Title hostage, if Hurt Business gain these straps, they would be the most dominating feature of RAW.

However, WWE love themselves some New Day and don’t really care about the tag division, therefore, I’m picking New Day to pick up the victory.

WWE have really tried to build this SmackDown Women’s Championship match into something huge.

Some may argue and say Sasha Banks is a great champion and can carry anyone to stardom. Others can see that Carmella is a great talker and their trash-talking is one of the attributes to this match actually gaining some tension. I was rather surprised when Carmella smashed a champagne bottle over the head of Banks. Wow, these women are gaining some friction.

However, that is were it all ends. How are we to forget all of Carmella’s losses before she was “Untouchable”? We don’t and therefore, we all agree Banks will retain here.

I’m so pleased to see an inferno match return to my tv screen, moreover, a firefly inferno match. What the heck is the difference? I hope it is something terrifying like Wyatt’s firefly funhouse puppets on fire, surrounding the ring.

Who wouldn’t want to see a flaming rambling rabbit? He hasn’t died the previous hundred times he has been slaughtered so we don’t need to threat about safety precautions.

Traditionally, an inferno match is literally match where the ring ropes are on flames. Notably used during Kane matches. Furthermore, it has more relevance to Wyatt as he actually wrestled his first WWE PPV match against Kane in an inferno match at SummerSlam in 2013.

Plus, it is perfect storytelling in the long-term Wyatt-Orton feud. As during their biggest portion of heat, Orton ironically turned up the heat by burning down the house of Sister Abigail.

This is one of the ultimate reasons for Wyatt’s transition into “The Fiend”. Now, he is more dangerous and unstoppable and Orton is undoubtedly scared. This is the greatest vengeance storyline and I’d dare to say my most intrigued match of this PPV.

I’m going to predict “The Fiend” wins but I won’t be surprised of Orton gains the victory to continue this storyline as it still has a lot to offer. However, I hope they find a way to increase the rivalry length but with the Viper going to hell as the outcome.

I am so confused about the decision to remove Lana from this Women’s Tag Team Championship match against Shayna Baszler and Nia Jax. The latter, Jax, who has been humilating Lana by slamming her through the announce table, every week since September.

Now with Lana gone, that just leaves RAW Women’s Champion, Asuka, who doesn’t have enough tension with the tag champs to make sense. Some could argue and say Lana is still going to wrestle tonight, however, if she does just come down, deeming ‘TBD’ pointless, this would be highly anticlimactic.

I actually think Lana being removed has been done for one sole purpose. The return of Charlotte Flair.

Charlotte has a notable record of entering matches she isn’t apart of, such as the WrestleMania main event against Becky Lynch and Ronda Rousey.

Whatever way the develop this, it has got me curious to see the results and if it is just a Lana return, please make this a tables match. I’m picking Asuka and whoever is her tag team partner to walk away with the Women’s Tag Team Championships.

Lastly, let’s discuss the other Tables, Ladders and Chairs match to be ruthless on this show. Drew McIntyre defending his WWE Championship against the Phenomenal One, AJ Styles.

This rivalry has deserved so much more than handicap matches against Miz & Morrison. Their jokes are so unfunny that it is desaturating what should be the best feud of this show.

Honestly, how can WWE mess up Drew McIntyre vs. AJ Styles?! Like it is their first ever match tonight but no one cares! Despite this, I’m sure they will put on a clinic tonight and leave me relieved they kept to it. I would have just rather less Miz and Morrison.

Also, Miz better not cash-in here. It has a high potential of happening and I’d cry if it did. We don’t need to see Miz end the year of 2020 with the WWE Champonship. We really don’t.

Another layer to this match is the gigantic one of Omos. This dude shocks me with his towering height each time he bodyguards Styles. A stare-off between him and McIntyre would be mouth-watering.

As you can see, there are many ways McIntyre can lose his gold tonight. Nevertheless, I hope not and predicting my boy to retain.

There we go! I hope you enjoy the show and get to witness many tables being shattered – probably with Lana at the receiving end.

If you want to offer your predictions and takes on the show, fire me a tweet over on Twitter.

Have a great Christmas and I’ll see you all with my first WWE predictions of 2021!