Today’s blog is an exciting one indeed as we woke up and took the train out of Lisbon, through the grasslands and scattered villages of West coast Portugal and into the mountainous town of Sintra.

Failure hit us in the face, unexpectedly, when we tried to use the Lisbon card to get on the 434 bus up to Pena Palace. We thought because it gives us discounts into the town’s attractions, we must get free transportation similarly to being in the capital. However, that was not the case. We where in Sintra. Not Lisbon. We paid €13 euro something for a day ticket and that was us sorted.

The roads leading through the forest and up the mountain where bumpy, adventurous and quite terrifying to say the least. The bus had as many people as it could tightly squeeze on. Which didn’t help matters as the road was full of sharp turns and steep uphill battles. Morning mist still lay on the mountain’s level, leaving nothing but trees to the naked eye.

Finally, we arrived at Pena Palace and even though the dew was evaporating, the view directly in front of us was breathtaking. Firstly, I want to point out how pathetic queuing systems are in Portugal: what is the point in waiting to purchase a ticket to then join the actual queue which is roughly 3x larger in size. This just adds to the time it takes to get to this spectacular WHS (World Heritage Site). 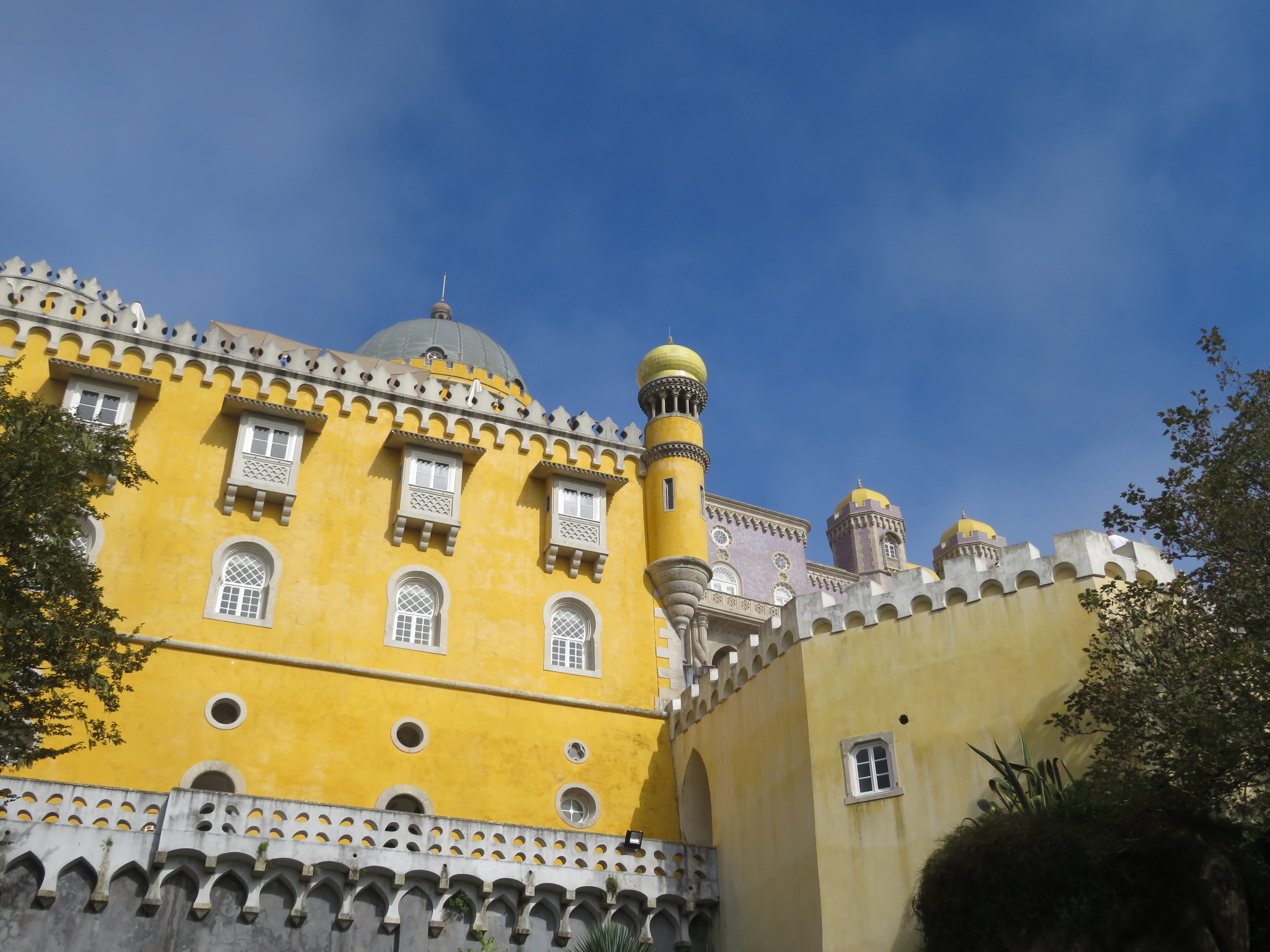 Pena Palace was stunningly vibrant and sparkled in the rising heat. If I lived here, I would never have to travel again. Probably the most colourful castle I have ever seen – and my favourite. Which is a difficult role to take on seeing as I live in Scotland; a place where castles used to be as frequent as McDonald’s. The inside was marvellous too. A great experience and one of the most memorable of the trip. 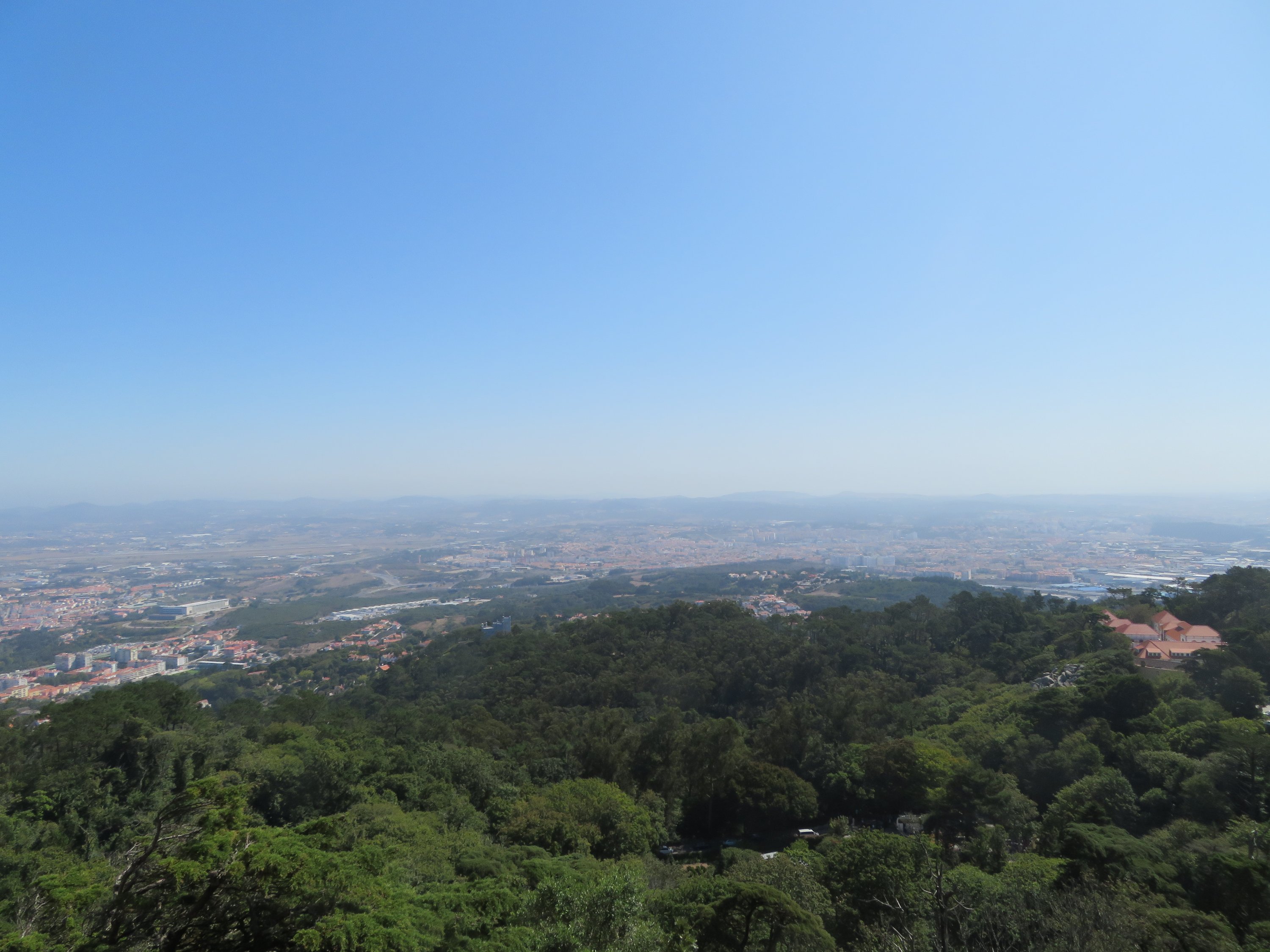 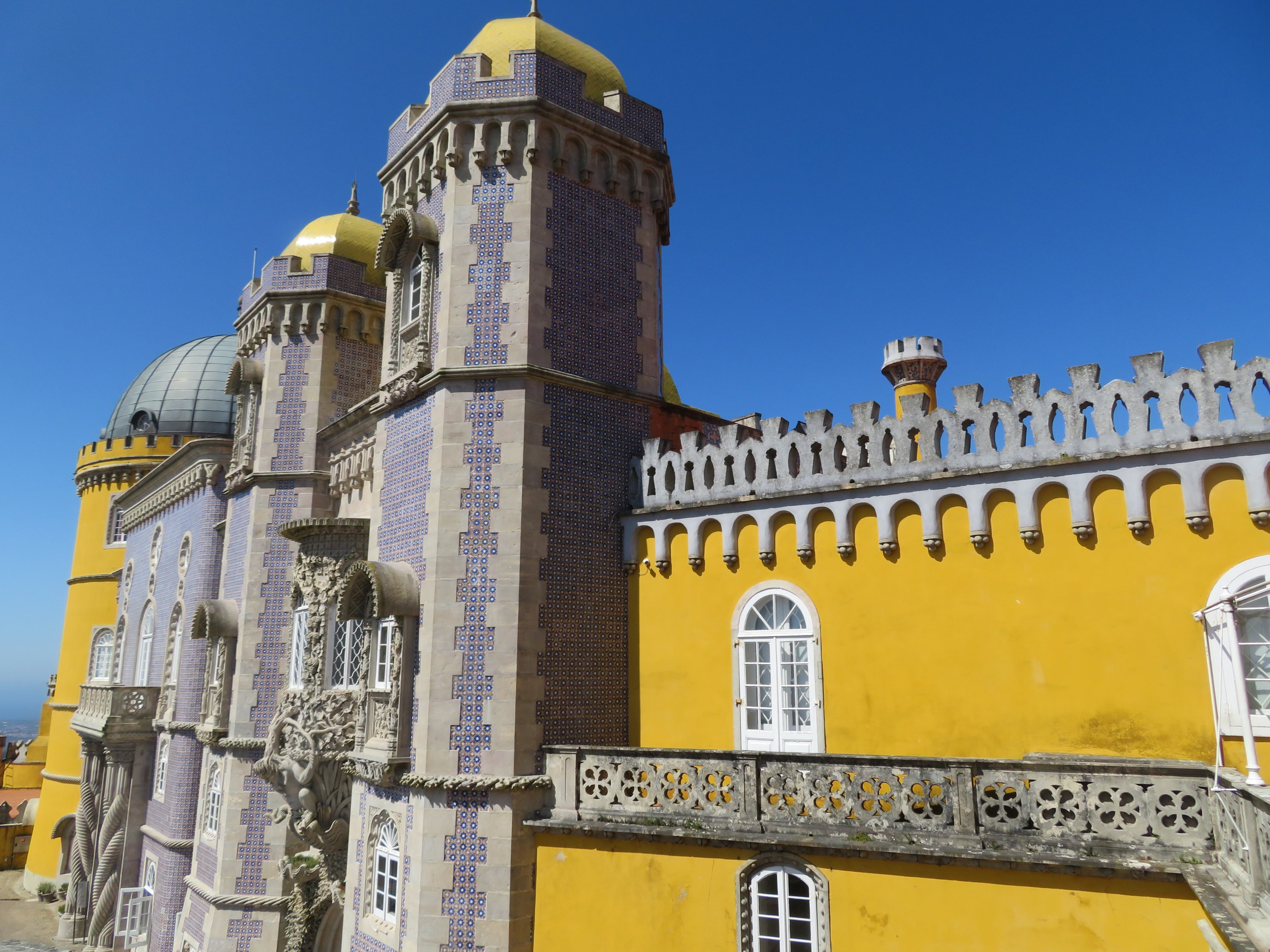 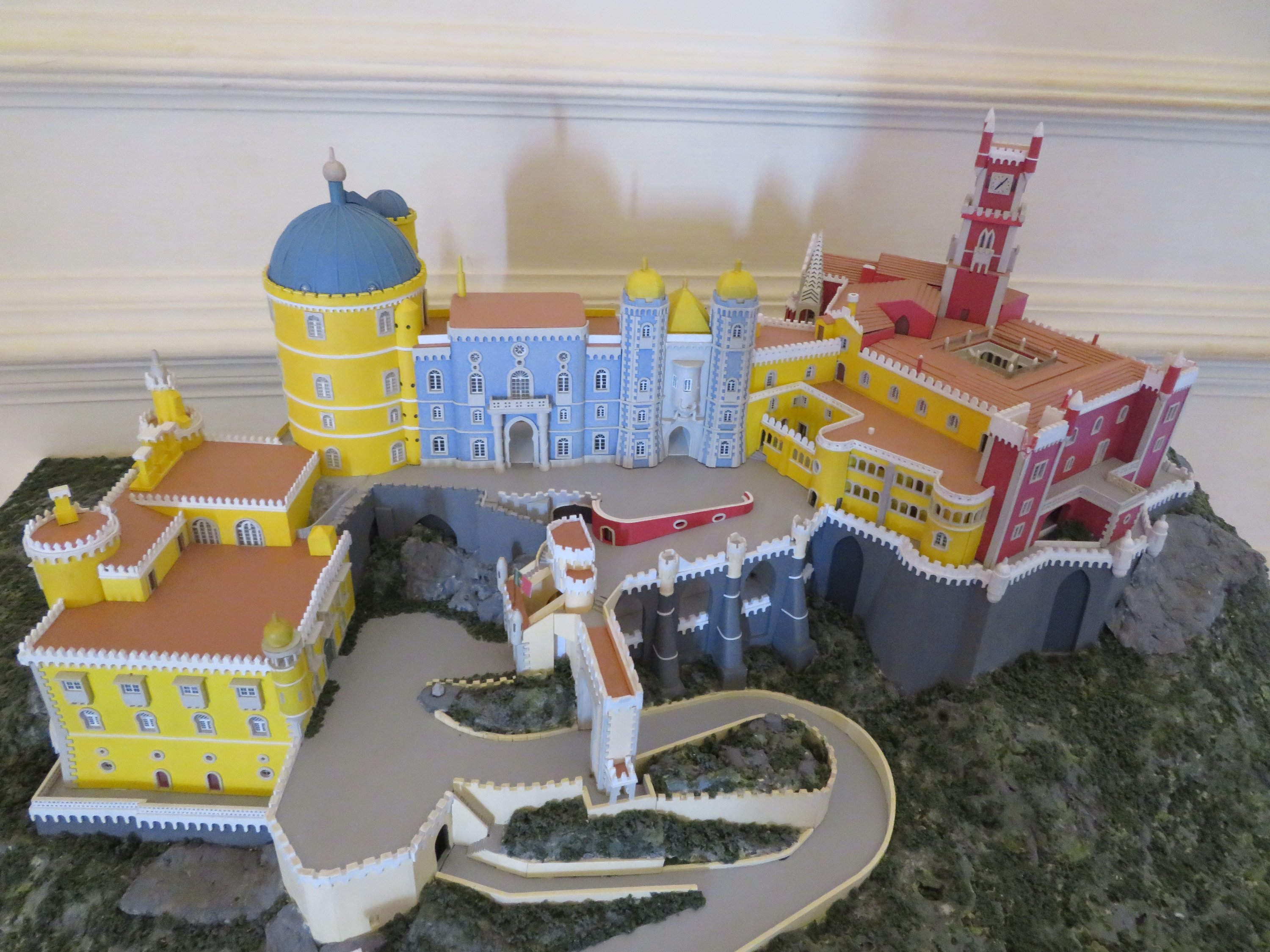 After this, we walked downhill and over to Moorish castle; or what I like to call: “The Great Wall of Sintra”. This castle spiralled along the mountainside like a Chinese Dragon. Flags posted on each viewing point. Incredible views every way you looked! A lovely spot to take photos – however it does come with one slight issue… The amount of steps and steepness this castle had was insane. My legs were wobbly when it was all said and done! 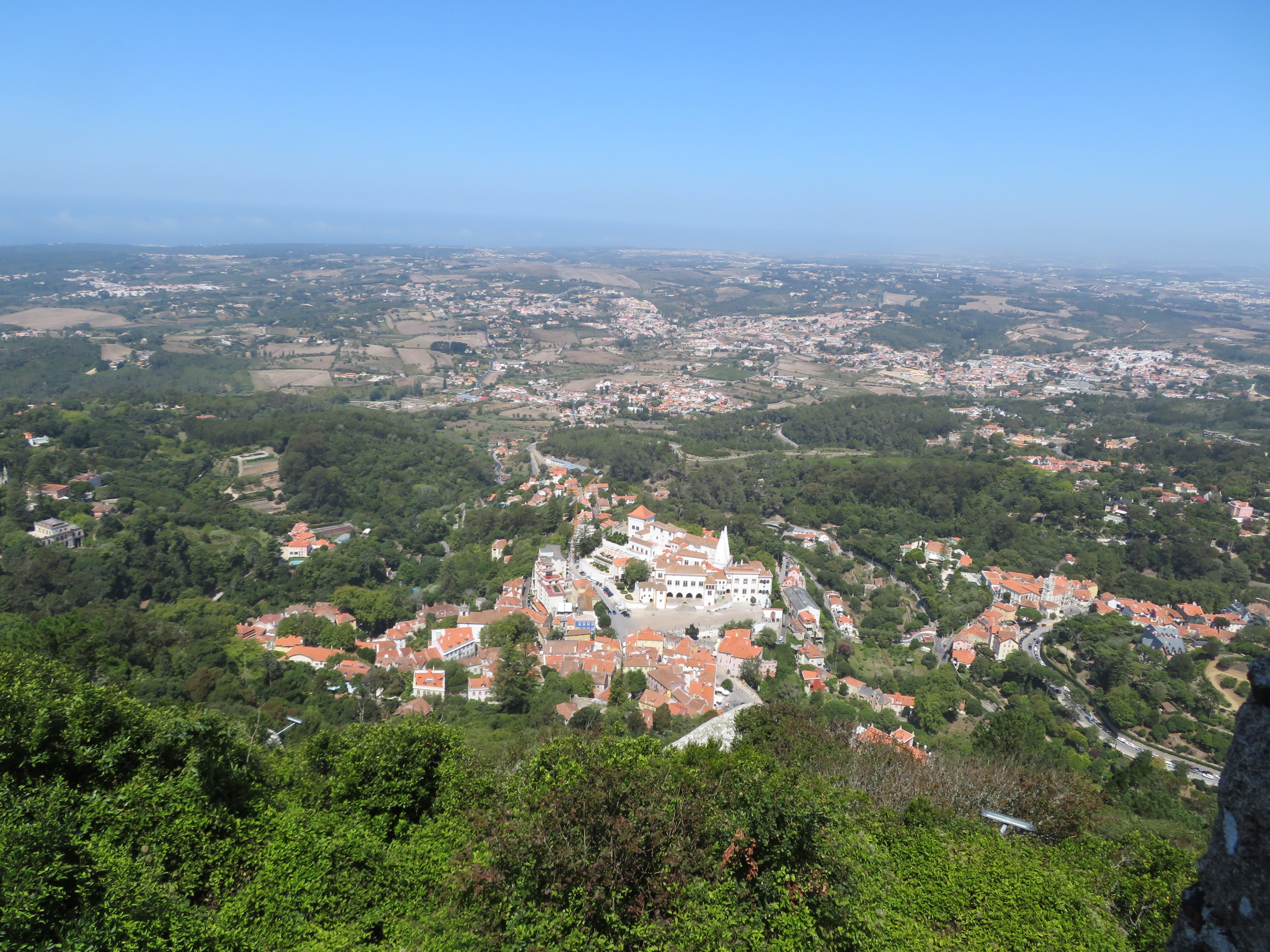 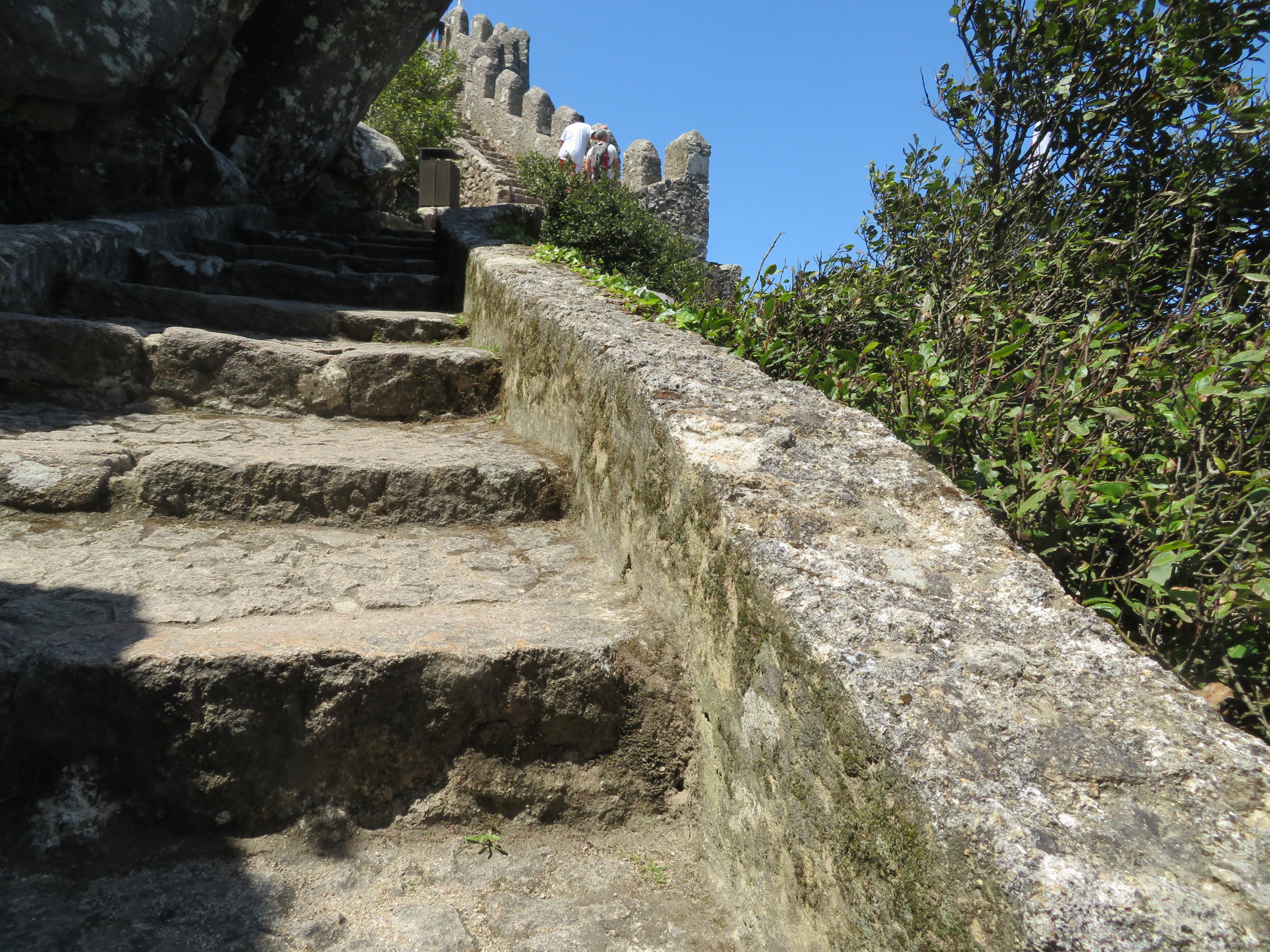 Next stop was going to be the Palace of Sintra. We had no idea what this looked like though. This led to us spotting an interesting designed building in the forest and assuming it was the one. We still have no clue what this building is as the path we took looped as right back to the mountaintop – where Pena Palace was situated! I was tired, hungry and desperate to see another palace, furthermore, reality was we were ‘Lost in Travel’.

This time we made efficient use of our day ticket and hopped of the bus onto the main square. This was a lively area which conveys Sintra consumes lots of tourist profit due to its natural beauty and historical background. For lunch, we headed to a restaurant which we assumed did burgers. It may have or may have not, but we saw it nowhere on the menu. It was a local tapas restaurant, which wasn’t appealing to us. Due to the shame of just walking out, we decided to buy chips and a drink before heading for our proper lunch.

Beforehand, I thought I saw a burger restaurant on the way to the tapas place. The one I saw did sell burgers, however it wasn’t the most ideal place to eat. It was only one of those local joints that you get across the world. You know what ones I’m on about, right? The burger, chips and drink were fine but the standard was Rustlers burger level for €12.50 each. That was mad and only done through hunger.

After a little stroll through the main town, we rested on the steps of the square’s cathedral. Keen on visiting Sintra palace before returning to Lisbon, we searched for it thoroughly on Google Maps. Only to find out we where sitting on the steps of Sintra Palace…

In we went and this looked like a cosy place for King Ferdinand II to live. He had everything: a smoking room (ew), a telephone room (probably one of the 1st users) and a green room (I still have no clue what this is). It had Arabic influence in the architecture – like most places in Lisbon & Sintra – which gave it a glamourous style. 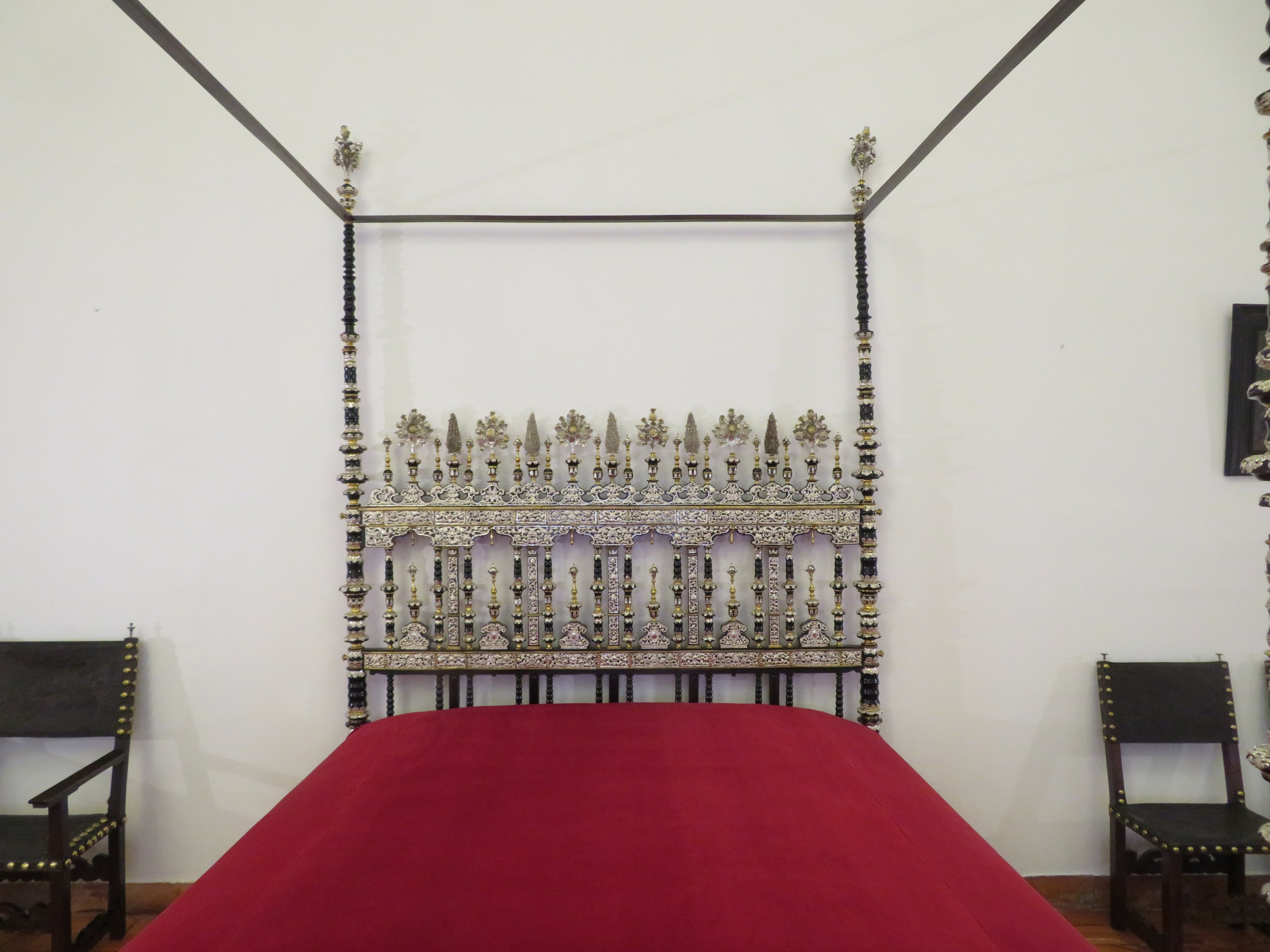 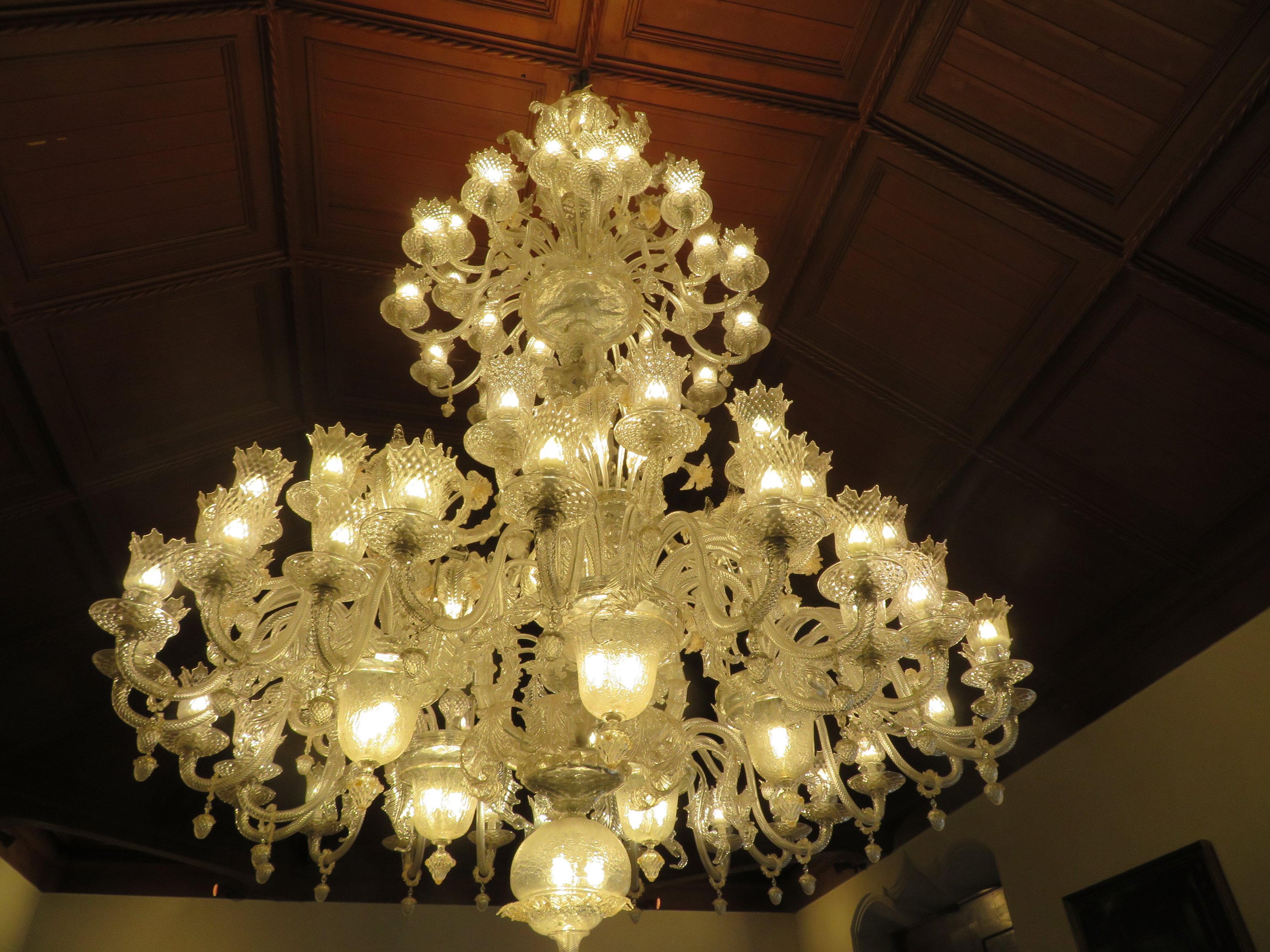 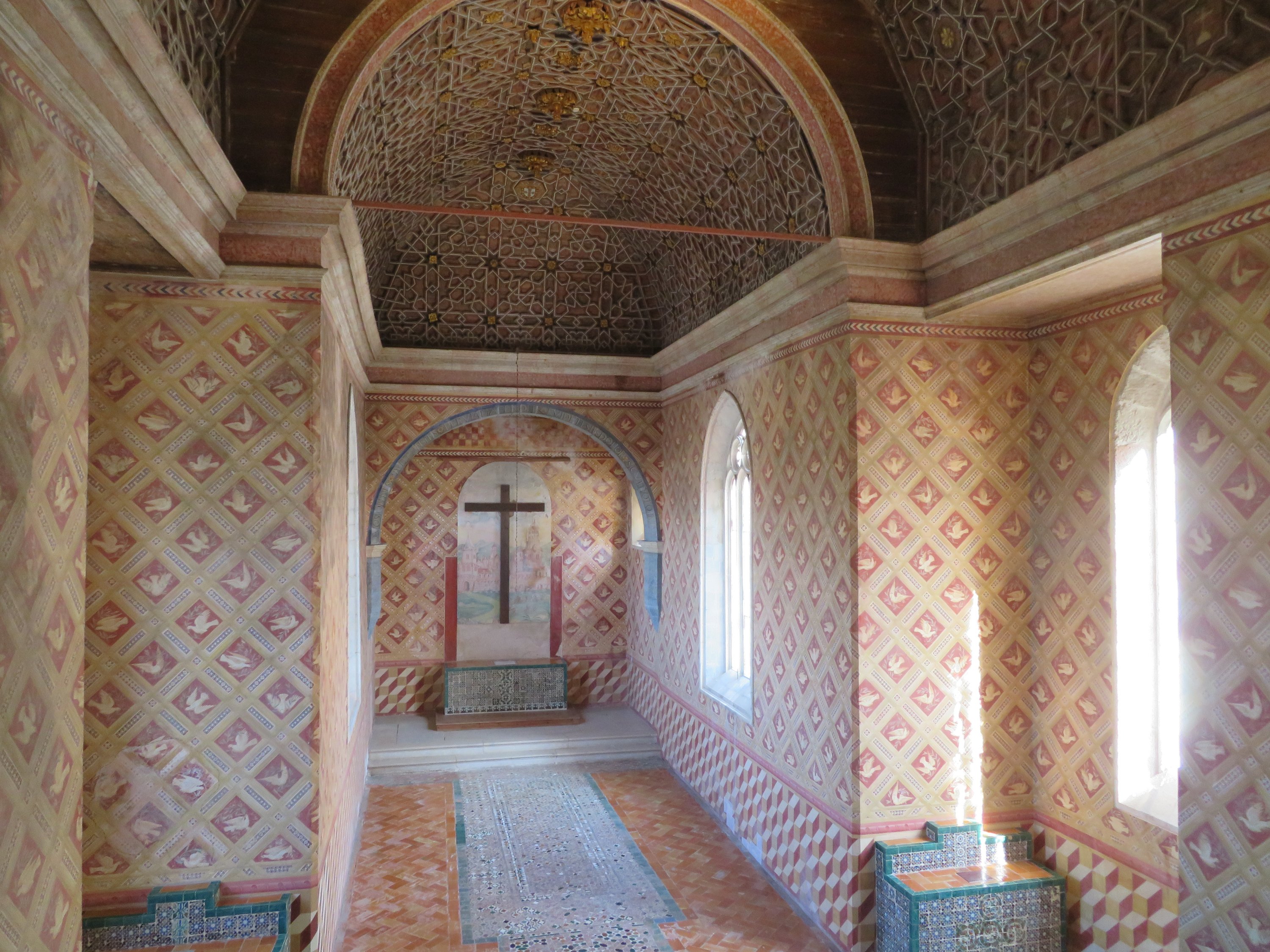 Departing Sintra, I thought I would have to leave my Uncle Graeme behind. I got through the gates but strangely his Lisbon card wasn’t activating his opening to the train. Determined to leave and return to Lisbon, he must have tried each scanner before finding one that gave him the gateway to his heaven.

Once we arrived back in Lisbon around 7pm the temperature (which was as hot as the day before but we endured it more due to the forests shade) was decreasing and wind started to sway slightly. We picked up 6 custard tarts for a deal of €5.20 and yes, greedy me, ate three.

We couldn’t be bothered leaving the hostel, so we didn’t end up going for food until 10pm! Due to not wanting to walk far, we went to the restaurant that we dined at for the 1st meal – Nosolia Italia. This was because we were handed offers on Sunday which states we get 20% on main courses. This cheapened our meal nicely. I went for a spicy pizza which was a nice bookending moment to the holiday – 1st meal and last meal is pizza. Or it is just because I always eat pizza because it is the greatest food to grace these lands. I was also in need of a chilli kick and this pizza did the trick. 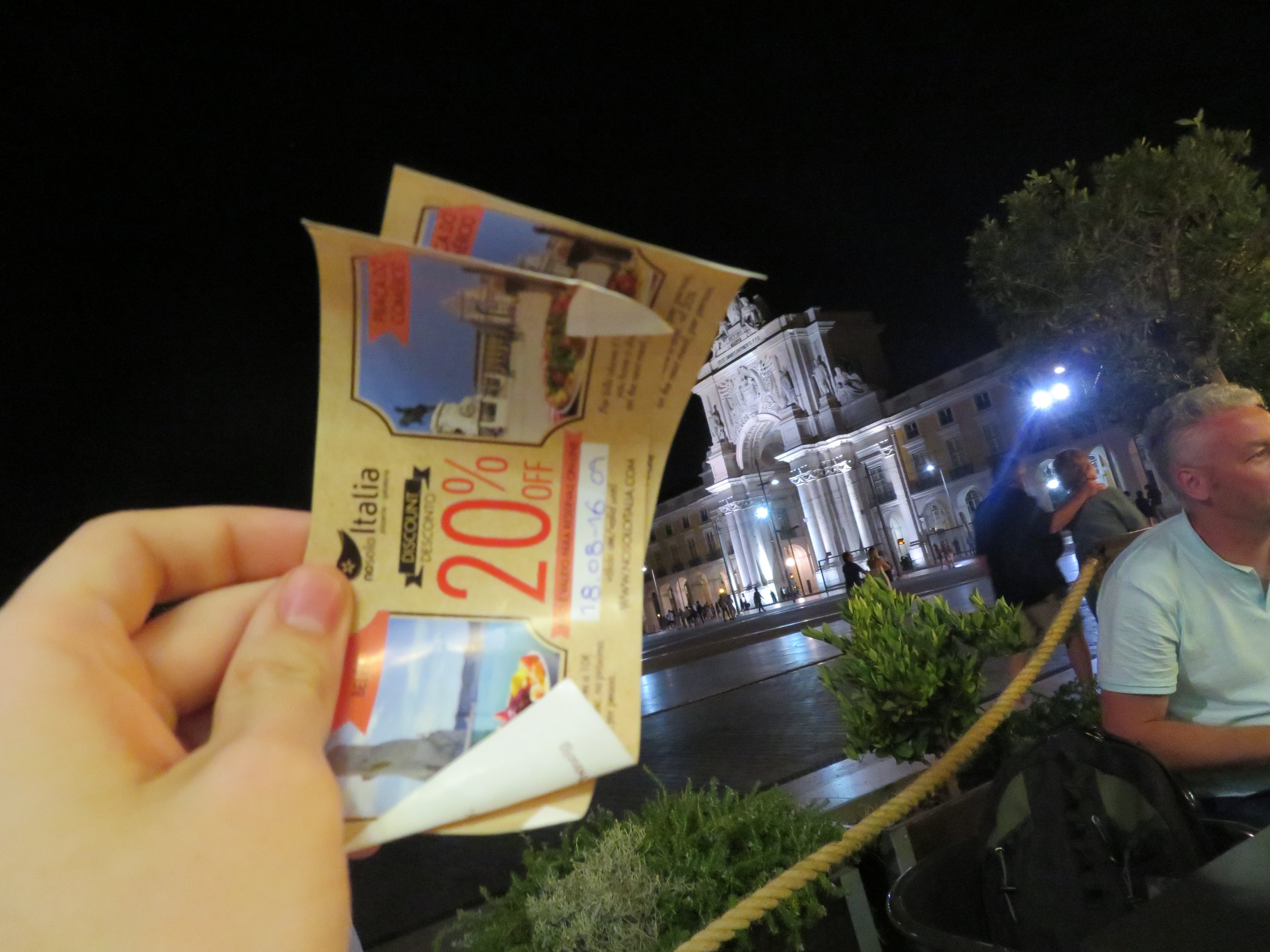 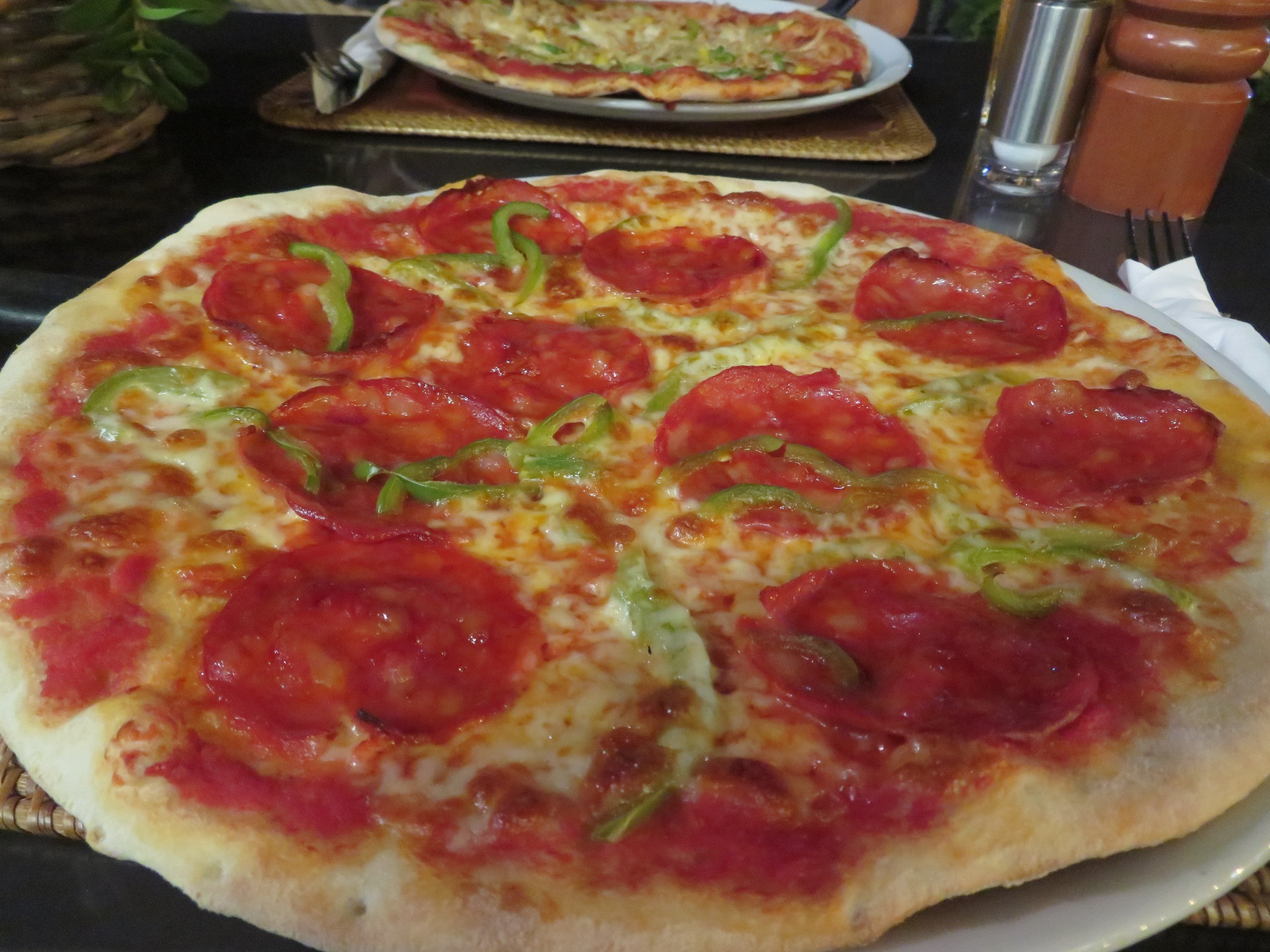 Lastly, we went on a small stroll around the dark streets of Lisbon. Walking past the pier and through Commercio square, watching the trams pace up and down the hills, getting lost in the city life for one more time. It was a lovely way to end the trip – walking past the things that created everlasting memories. We then went to a British bar (which wasn’t really British) so Graeme could drink an alcoholic beverage. I was a hard man on the cola’s.

Lisbon, you have been a dream. 💖